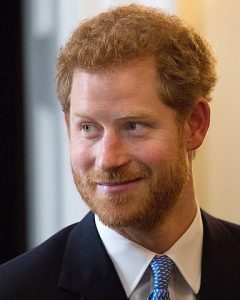 If he wasn’t already a Prince, women the world over would be calling him one.

On November 28, Britain’s Prince Harry (photo by Suzanne Plunkett) and America’s Meghan Markle finally confirmed that they – like so many other couples this season — are engaged to be wed. In a surprising twist, they revealed that her ring was designed by none other than Prince Harry himself.

The engagement ring is set in yellow gold and features three diamonds, all of which have special meaning for the royal couple. The central stone – square-cut with rounded corners — happens to be a diamond from Botswana, a country that Prince Harry has visited frequently in his life. In their engagement interview, they confirmed that Meghan spent several days with Harry there just a few weeks after they first met.

The other two brilliant-cut diamonds flanking that stone bear bittersweet memories: they come from the personal collection of the Prince’s late mother, Diana, Princess of Wales. The beautiful ring was commissioned according to Harry’s specifications and crafted by court jewelers Cleave and Company.

“It’s obviously yellow gold because that’s [Meghan’s] favorite,” said Harry in the interview, adding that the side diamonds “are from my mother’s jewelry collection to make sure that she’s with us on this crazy journey together.”

Markle praised her groom-to-be’s sentimentality and thoughtfulness. “Obviously not being able to meet his mom…it’s important to me to know that she’s a part of this with us. It’s incredibly special. And to be able to have this [ring] which links where [Harry] comes from and Botswana, which is important to us – it’s perfect.”

Diamond ring could be worth in excess of $1 million 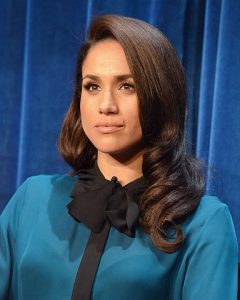 The ring seems to fit perfectly. The couple also shared that Harry popped the question at home a few weeks ago over a roast chicken dinner, allowing plenty of time for it to be resized. For the photo session with the press, Markle matched it with a pair of yellow gold and opal stud earrings by Canadian jewelry brand Maison Birks.

The value of the ring is up for speculation, as the exact carat-size and color grade of the diamonds is unknown. Reports say the 12-carat sapphire ring surrounded by 14 smaller diamonds that belonged to Diana is estimated to cost around 30,000 pounds, but worth more than $1 million because of the royal connection.

Given that Markle’s ring is also a custom-made piece using Diana’s diamonds, experts suggest that it will likely be valued as much as the ring William gave Kate, if not more.

What is not up for dispute is that the ring – and the union – are priceless.

Custom designs aren’t just reserved for royalty. We invite you to visit F. Silverman’s showroom in Woodcliff Lake, NJ and meet with our custom jewelry designers to craft an engagement ring that makes a personal statement for the both of you.

Read more about the engagement of Prince Harry and Meghan Markle:

Holiday Jewelry Gift Guide for Her

It’s the most wonderful time of the year! As you prepare for the holidays, write shopping lists, and start sending season’s greeting cards, don’t forget to shop for the special women in your life—whether it’s your mom, wife, girlfriend, best friend, or sister. To help you recreate that magical feeling this holiday season, here’s a jewelry holiday gift guide for ... Read More

Dust off your dreidel and prepare to spend quality time with your loved ones–Hanukkah is already around the corner! From elegant diamond micro tennis bracelets to regal solitaire pendant necklaces – and perhaps a Star of David pendant necklace to honor the holiday – F. Silverman is here to take the stress out of your Hanukkah shopping. Sparkle and Shine ... Read More