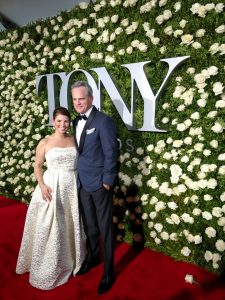 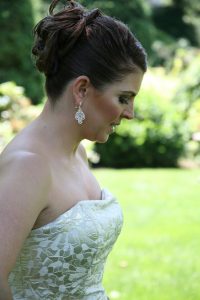 Laurie Park was radiant on the red carpet in a show-stopping, strapless ivory gown, which was flawlessly complemented by F. Silverman jewelry. Laurie wore a 14k oval diamond ring set in yellow gold with delicate milgrain bezels by Diamond Craft Designs. Her lovely chandelier earrings, by Coral and Stones, were made of 18k white gold and yellow gold. Laurie’s wrist was graced by a 14k yellow gold Diamond Pave Bangle bracelet in lattice design by Luvente.

Social isolation and teenage angst have never looked so good on stage. The title character, played by Ben Platt, is a nervous fellow who is too scared to interact with others. He can’t even face the pizza delivery guy at the door. Yet, he desires human connections. Evan longs to be loved and accepted for who he is. His fear and longing drive him to the Internet, where connectivity is often used as a shallow substitute for connections. Evan tells a lie that snowballs into a viral chain reaction and leads him to live a double life.

“We were really interested in the exhibitionism of the Internet,” says Steven Levenson, the scriptwriter. “We are so comfortable sharing the most intimate parts of ourselves with total strangers, and then among the people we’re ostensibly the closest to, we don’t share anything.”

“Like Evan, you can look at a Facebook feed or social media and watch the marvelous lives of everyone else and think, ‘I’m not a part of any of that,’ ‘I don’t have a life like that,’ and feel lonelier than ever,” says Justin Paul, who, along with Benj Pasek, forms the dynamic duo who developed the story and wrote the music.

Get your own red carpet look at F. Silverman Jewelers

Anyone can make the decision to unplug in order to truly connect—and what better place to start than F. Silverman Jewelers? Ditch the impersonal e-commerce websites and instead visit the master craftsmen at our shop in Woodcliff Lake, NJ. We take the time to get to know each customer because we truly believe that your jewelry should be reflective of your inner beauty. You can call us any time at (201) 930-8883 or come in and see us at 24A Chestnut Ridge Rd.

Wearing Jewelry at the Office: Do’s and Don’ts

F. Silverman supports many local charitable causes For more than 20 years, F. Silverman has been a family business dedicated to providing Bergen County residents with a wide selection of beautiful diamonds and fine jewelry at competitive prices. We are extremely proud to be a part of such a vibrant community, and make special efforts to give back whenever we ... Read More

The woman in your life deserves the best. So, when Valentine’s Day comes around, you want to give her something extra special. Everyone loves a beautiful bouquet of roses and a box of heart-shaped chocolates, but why not surprise her with a gift she’ll remember forever? Whether you’re shopping for your girlfriend, wife, daughter, or mom, here are some touching ... Read More