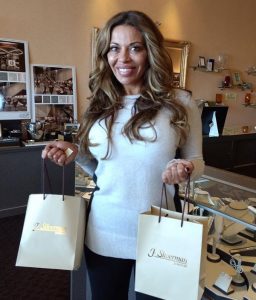 Dolores Catania, one of the stars of Real Housewives of New Jersey, made a recent appearance in F. Silverman Jewelers’ Woodcliff Lake, NJ store and departed with a couple of our unique pieces to wear on the popular show.

We loaned Catania a necklace and bracelet from our collection to wear for an upcoming shoot. The actress was being styled for the special Season Eight reunion taping scheduled to air in January on Bravo TV.

Real Housewife Is a Master of Reinvention

According to Bravo’s website, Catania is “a mother, entrepreneur, philanthropist, and the living embodiment of a modern-day housewife.” She was born in Paterson, NJ, and consistently puts family above all else, working tirelessly to maintain a close family unit with her two children Gabrielle and Frankie, ex-husband Frank, and two rescue dogs, Loli and Lola.

Catania is a master of reinvention. She started her career as a correction officer, then trained to be a surgical technician, and has been a licensed realtor for NJ properties for 15 plus years. Most recently, she opened two Powerhouse Fitness Centers. The reality star is an active supporter of the Onyx & Breezy Foundation, whose mission is improving and saving the lives of animals every day. 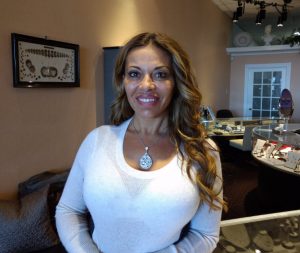 Additionally, the actress stumps for Saint Joseph’s Children’s Hospital. Despite all the twists and turns in her life journey, Catania always comes back to her roots and will never forget where it all started – right here in New Jersey. Hence, when it came time to select some pieces for the special taping, she chose F. Silverman Jewelers in the Garden State.

F. Silverman Jewelers brings the latest jewelry styles to our Bergen County clientele, including many stars of the stage and screen. Our Woodcliff Lake, NJ jewelers will help guide you to the perfect selection, whether you are looking for diamond earrings, engagement rings, custom-made jewelry and more. Come by today and find your next camera-ready look!

A push present is a gift bestowed upon a woman giving birth by her partner. Though the roots of this tradition stretch back to India, where it is customary to shower mothers with gifts to honor and bless her—as opposed to the baby shower tradition, where gifts are for the baby. A jewelry push present offers a beautiful reminder to ... Read More

VOTE NOW: Best of Bergen Poll F Silverman Jewelers is proud to announce that we have made it to the next round of voting for the Best of Bergen 2023! Thank you for nominating us as Best Jewelry/Watch Store in Bergen County. We appreciate our customers! Now we are asking for our customers help, again! Please vote for us to ... Read More