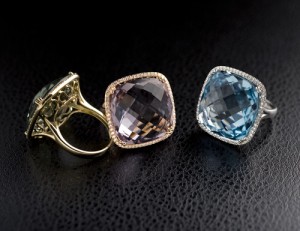 Birthstone jewelry makes a thoughtful gift for the most special occasions in life, such as birthdays, weddings, anniversaries and graduations.

The modern day list of birthstones was created by American jewelers for marketing purposes in 1912, but the use of twelve traditional gemstones for special significance and healing powers is a tradition dating back to the first century.

Ancient civilizations including the Greeks, Romans, Tibetans, Egyptians, Persians, Incas and Aztecs strongly believed in the power of gemstones, which have been recovered in archaeological digs for centuries. First Century Jewish Historian Josephus believed there was a connection between the 12 months of the year, the 12 signs of the zodiac, the 12 tribes of Israel, and the 12 stones in the breastplate of Aaron, High Priest of the Israelites and brother of Moses. Biblical text in Revelation called these the “Foundation Stones” of Christianity. Sometimes these stones were used to interpret the will of God. The devout believed in wearing one stone a month for good fortune and virtue. The origins of our modern-day practice wearing a single birthstone are up for debate. Some say it goes back to 16th century Germany, while others say the custom began in 18th Century Poland.

What is your birthstone and what does it mean?

The 1912 list of birthstones and their interpreted significance are as follows:

Birthstones are taken rough and ungraded from the mines. They’re then cut into clean, quality pieces. “Cutting cabs” is the most common form of gem cutting, according to the International Gem Society. During this process, gems are cut with a flat bottom and domed top that features geometrically arranged, flat surfaces called “facets” that bring out the natural brilliance of the stone.

As the consumer, you can choose from different shaped cuts such as:

How much do birthstones cost?

The value of any gemstone is dependent upon the Four C’s: Color (the richness of shade), Clarity (the level of transparency), Carat (the gem’s size), and Cut (how well the gem has been faceted).

Generally speaking, the most affordable gemstones are the peridot, amethyst, topaz and pearl, which may often be procured for less than $200 per carat. The next tier includes garnets, aquamarine, turquoise and opal for less than $300 per carat. Next you’ll find sapphires and rubies for $700 and upwards.

Diamonds are considered by many to be the rarest and most expensive type of gem. However, rubies of excellent color and clarity weighing over one carat and top-colored emeralds with visible inclusions can be worth more.

Find the perfect gift for a loved one or yourself

Don’t let price be a deterrent. Find that special birthstone ring, necklace, bracelet or set of earrings at F. Silverman fine jewelers in Woodcliff Lake, NJ. We have gems in all different price ranges and dedicated sales professionals who are happy to help you find the perfect color, clarity, carat and cut that match your needs and budget. In addition, we are pleased to offer custom designed jewelry services to all of our clients.

What Jewelry Should I Get My Girlfriend for Christmas?

What Women Want For Christmas: Diamonds!

A push present is a gift bestowed upon a woman giving birth by her partner. Though the roots of this tradition stretch back to India, where it is customary to shower mothers with gifts to honor and bless her—as opposed to the baby shower tradition, where gifts are for the baby. A jewelry push present offers a beautiful reminder to ... Read More

VOTE NOW: Best of Bergen Poll F Silverman Jewelers is proud to announce that we have made it to the next round of voting for the Best of Bergen 2023! Thank you for nominating us as Best Jewelry/Watch Store in Bergen County. We appreciate our customers! Now we are asking for our customers help, again! Please vote for us to ... Read More