Home News Lesser-Known Gemstones That Are Rarer Than Diamonds 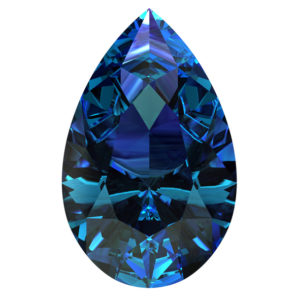 When it comes to gemstones, diamonds are practically the gold standard (pun intended). But they’re not quite as rare as you might think. There are quite a few lesser-known gemstones that you aren’t likely to find on a typical engagement ring or set of heirloom earrings. Painite, alexandrite (left), and tanzanite are just a few beautiful examples of exceptionally rare gemstones.

In 1950, Arthur C.D. Pain went to Burma (present-day Myanmar). Arthur was a mineralogist and gem dealer from Britain. During his trip, he discovered a unique, hexagonal mineral of orange-red and brownish-red hues. For decades, there were only two known faceted painite gemstones in existence. This changed in 2005, when several thousand fragments and crystals of painite were discovered. It’s still an incredibly rare gem, however, as complete crystals are few in number. Only a few crystals have been faceted to date.

Alexandrite is a rare type of chrysoberyl, and it’s in the same family as emerald. The addition of traces of titanium, chromium, and iron is responsible for alexandrite’s remarkable color-changing properties. Any gemstone that shows different shades as you move it around in your hand is said to be pleochroic. Alexandrite is pleochroic, but it’s also capable of changing its colors with changes of light, regardless of the viewing angle. In natural sunlight, this exquisite gemstone is a bluish-green. In the evening, artificial light turns the gem a brilliant purplish-red hue.

Geography aficionados may have already guessed that tanzanite was named after Tanzania, its country of origin. Legend has it this beautiful gem is about 1,000 times rarer than diamond. It’s debatable, but believable, given that tanzanite is only found in the foothills of Mount Kilimanjaro. The only known deposit on earth was created over 585 million years ago. Tanzanite had a difficult childhood, being born of the violent tectonic plate activity and scorching heat that also gave birth to the mountain itself.

Just like the intrepid explorer who discovered tanzanite, the original discoverer of benitoite thought that the stone was sapphire because of its brilliant blue color. But benitoite has an even more interesting property: It fluoresces under a UV light. It’s been described as a glowing blue chalk when viewed in this way. The only major deposit of benitoite is at the head waters of the San Benito River in California, although poorer quality and lesser amounts of the stone have also been found in Japan and Arkansas.

During their years of serving the Bergen County, New Jersey area, F. Silverman Jewelers has earned a reputation for superior craftsmanship and exceptional integrity. We offer an exquisite selection of fine and fashion jewelry, suitable for every occasion. And if you don’t see something that catches your eye, our jewelers will craft a custom piece just for you. Call 201.930.8883 or swing by our shop on Chestnut Ridge Road in Woodcliff Lake, NJ.

What’s the Most Popular Cut of Diamond?

7 Meaningful Gift Ideas For Your Valentine

Lesser-Known Gemstones That Are Rarer Than Diamonds

Can I Design My Own Engagement Ring?

When you decide to take your commitment to the next level, the ring you choose should be just as special as the one you love. Planning to get down on one knee this Valentine’s Day and stun her with a personalized ring that reflects her unique style and taste? Or maybe you and your partner are collaborating on a one-of-a-kind ... Read More

The winter holiday season and Valentine’s Day are popular times of year to propose – but no matter when you’re ready to pop the question, you’ll need to shop for an engagement ring that’s as unique as your loved one. The beauty of an engagement ring is in the eye of the beholder, so choose one that complements your loved ... Read More